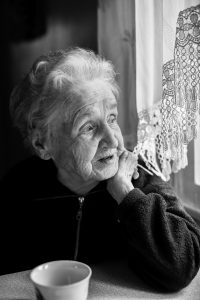 Anna (who is several real people blended together. I never use real names in my blogs) is the cutest little 80-year-old stroke victim you ever saw. Anna’s hair is snow white and soft to the touch. Her eyes are big and blue. She has spent her life caring for others: her (late) husband, her five children, and her nine grandchildren. She smiles sweetly when her children come to visit her in the Home. She trusts them completely.

Long ago, Anna’s doctor tested her cholesterol. It was high. So he put her on a statin drug. Her children said it was OK, so sweet, trusting Anna started taking the drug. Pretty soon, her legs started to hurt. No one could explain the pain, and no one could stop it. It became worse, and soon she had to begin using a walker. Something was eating away Anna’s leg muscles, breaking them down bit by bit, but no one knew that. Anna hurt even worse. She lost her ability to walk and was confined to a wheelchair. Since everyone thought all old people lose their ability to walk, no one consulted a doctor about it.

2. Causes the muscles to hurt.

3. Why? Because rhabdomyolysis is slowly breaking the muscles down.

4. Eventually, Anna’s legs will be useless.

Other Rare Side Effects of Statins – Interstitial Nephritis or Cystitis

1. These conditions have the symptoms of a UTI (bladder infection), but they’re not UTIs.

2. Why not? Because they’re not caused by bacteria, as a UTI is.

3. They’re caused by drugs, such as statins.

4. Eventually, they may lead to serious kidney problems.

There are many more drugs besides statins that can cause hypersensitivities, especially in the elderly. Anna’s children could:

1. Find out from Anna’s doctor which medicines Anna takes and the possible side effects of each of them.

2. Watch Anna and see if she has any of those side effects.

3. Have the doctor remove the drugs that may be causing side effects, at least temporarily, to see if Anna’s symptoms go away.

Between the rhabdomyolysis and the nephritis/cystitis (depending on whether her kidneys were affected, or just her bladder) it’s so hard for Anna to get  around that she can’t help her children any more. She lies on her bed asking herself, “What good am I?”

As Anna falls asleep, tears drip from her eyes, tears her children may never see.

Have you ever met a person over 60 who was plagued by drug hypersensitivities? Were you able to help them? Go to the Contact page and talk to me!